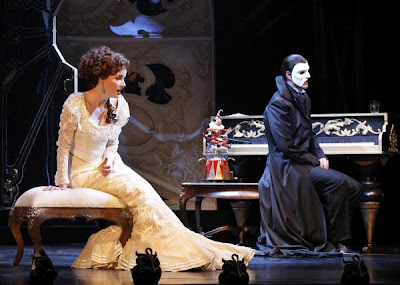 On Saturday night, the Australian premiere of a significantly overhauled Love Never Dies - the latest blockbuster musical by Andrew Lloyd Webber - was held at the Regent Theatre. It wasn't as dreadful as some people were perhaps expecting/hoping for, but it was definitely far from brilliant.

I've written a detailed review over here, for Arts Hub, but here's a short extract to whet your appetite:

Saved from the hands of a vengeful French mob a decade ago by choreographer Madame Giry and her ambitious daughter Meg, and secretly installed as the master of a Coney Island freak show and music hall, The Phantom pines after Christine, his muse, without whom his life has no meaning and his music no inspiration (opening number ‘‘Til I Hear You Sing’).

Reunited (‘Beneath a Moonless Sky’), the Phantom begs Christine to sing for him one last time, in return for which he will pay off all of Raoul’s gambling debts and leave them in peace at last. Their reunion, of course, cannot be so easily engineered, sparking tragedy, madness, murder and betrayal before the final curtain falls.

For fans of the original The Phantom of the Opera – which this reviewer is not – the story of Love Never Dies presents several significant challenges. Characters have changed considerably in the intervening decade – romantic hero Raoul has become a boozy, bad tempered gambler, while The Phantom, formerly a masked madman who killed without compunction, is now an altogether blander, less threatening figure.

A key plot detail is equally problematic. In the parlance of fandom, the events of Phantom have apparently been ‘retconned’ (from the phrase ‘retroactive continuity’) in order to create a paternity drama that drives Love Never Dies.

Even for theatre-goers who are not ‘phans’, the story lacks cohesion. It ignores Chekhov’s advice about guns fired in the final act being visible in the first, and introduces a character’s derangement so abruptly, and so late in the piece, that it comes across as pure deus ex machina. The conclusion of the tale is anti-climactic in the extreme.

Also problematic are the musical’s songs and lyrics. The latter are leaden and expository, while musically, despite lush orchestrations, there simply isn’t a showstopper; that one grand song which catches the heart in the throat and which audience members find themselves still humming a few days later.

Still, it looks fantastic, and technically it's extremely impressive. The after party, too, was great fun, though I didn't stay too long.

So what did you think of Love Never Dies?
Posted by richardwatts at 5:52 pm

I watched this last night and thought that while the set was spectacular, the storyline wasn't engaging enough (for some reason I had trouble accepting Gustave as the Phantom's son) and it was really the Phantom's role (and voice!) that made the show.

Enjoyed your write up :)

I believe this show takes more than one viewing to pick up the nuances - especially for the generation very familiar with Phantom of the Opera - the love triangle between the main characters is pulpable and crutial to the storyline and the characters are far more 3 dimmensional in this sequel.
Loved the show and the score - will see it again and again - it is a real treat

Luckily for me, I'm one of those people who always thought she picked the wrong guy anyway so this whole "OMG, she *did* love him! And they have a son!" story really appealed to me. Also it makes sense to me that Raoul now has a drinking problem, the Phantom is a less threatening character and Meg flips her lid out of jealousy, if for no other reason than people change. :o) Not a bad review though.

Didn't like the fact that they made the other characters apart from the protaganists more of a farce: that Raoul had become a dead-beat drunk, Meg a emotionally damaged slut, and Mdm Giry a greedy capitalist. This is all based on the Frederick Forsyth book "Phantom of Manhattan", and it was terrible. Still liked the good ol' Leroux version, where it does state that Meg became a prominent dancer and married royalty. This doesn't give the sub-characters dignity at all. If anything, I'd rather Susan Kay's version. But the few standouts were pretty alright, very Puccini-eques.